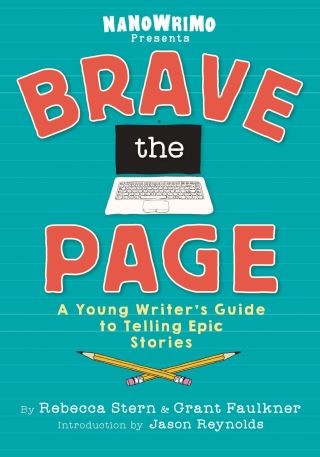 Partly a how-to guide on the nitty-gritty of writing, partly a collection of inspiration to set (and meet) ambitious goals, Brave the Page is the go-to resource for middle-grade writers. Narrated in a fun, refreshingly kid-friendly voice, it champions NaNoWriMo's central mission that everyone's stories deserve to be told. The volume includes chapters on character, plot, setting, and the like; motivating essays from popular authors; advice on how to commit to your goals; a detailed plan for writing a novel or story in a month; and more!

National Novel Writing Month (NaNoWriMo) is a 501(c)(3) nonprofit that believes in the transformational power of creativity. They provide the structure, community, and encouragement to help people find their voices, achieve creative goals, and build new worlds--on and off the page. With its first event in 1999, the organization's programs now include National Novel Writing Month in November, Camp NaNoWriMo, the Young Writers Program, Come Write In, and the "Now What?" Months.

National Novel Writing Month: Grant Faulkner is the Executive Director of National Novel Writing Month and the co-founder of the online literary journal 100 Word Story and the Flash Fiction Collective. His stories and essays have appeared in dozens of publications, including The New York Times, Writer's Digest, and Poets & Writers. He is the author of Pep Talks for Writers: 52 Insights and Actions to Boost Your Creative Mojo.

Rebecca Stern has experienced NaNoWriMo from every angle: she had her fifth- and sixth-grade students participate in the Young Writers Program when she was a teacher, did a victory dance in the 50K winner's circle in 2014, served on the Associate Board, was their Director of Programs, and is now their Young Writers Program and Development Consultant. She lives in San Francisco.